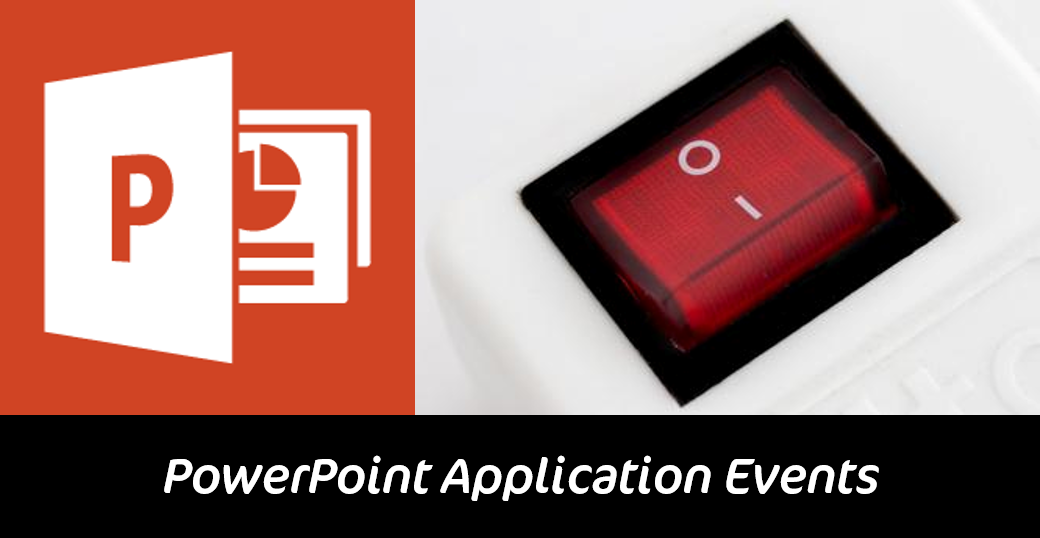 PowerPoint supports a range of events that fit into one of three categories:

These are covered below. Note that although many events are supported by the older non-ribbon versions of PowerPoint, we don’t include them here as these are more than 10 years old.

These events are the original ones developed by Microsoft for PowerPoint 97 so are very old now. While they remain within the VBA environment, it is not recommended to use them as they are buggy and hence unreliable. You should use the application object events whenever you need an event and there is only really one exception and that’s when you need events to work on PC and Mac versions of PowerPoint (PowerPoint:mac 2011 & 2016 doesn’t support the application event object model.

To use a pseudo event, you just declare the procedure using the signatures below. Nothing else is needed.

Note that the OnSlideShowPageChange can cause PowerPoint to crash if you use it to control the slideshow. Try this for example:

The OnSlideShowPageChange event doesn’t fire from a macro-enabled slide show file (.ppsm or .pps). To overcome this limitation, we can trick PowerPoint into initialising the pseudo events by adding any Active-X control from the Developer tab of the PowerPoint ribbon to your slide (add it to the off-slide workspace to avoid seeing it during the slide show).

The newer, more numerous set of 33 events are much more stable and are maintained by Microsoft, even added to over the more recent revisions but the one single drawback is that they are not supported by Mac versions of PowerPoint.

*The checked events for PowerPoint:Mac 2016 (which includes 2019 and Office365) are supported from version 16.X onwards.

If we create a presentation with all of the above events within a VBA project, we can see which events are fired and in which order when various actions are taken by a user. Here are a few examples, recorded from PowerPoint 2013 (free sample below):

To use any of the events above, you need to add the following code to your PowerPoint VBA project and then initialise the event handler:

1. Create a Class Module called clsAppEvents with the following line of code:

2. Select the required event in the VBE procedure drop down for App and write the event code to be run when that event fires:

3. Create a standard module with the following:

4. Initialise the application, for example, in Auto_Open() for an add-in:

Note: If you are not creating an add-in (.ppam or .ppa) then you cannot use Auto_Open to initialise the event handler. There is a way round this for PC versions of PowerPoint that support the ribbon interface e.g. 2016, 2013, 2010, 2007. You will need the free CustomUIEditor to do the following:

2. Add a standard module with the following code:

3. Open your PowerPoint file with the CustomUIEditor

5. Enter this XML code into the window:

6. Close the file and exit CustomUIEditor

7. Reopen the file in PowerPoint to see the debug message

This method is also useful for avoiding code running when the Auto_Open macro runs without a PowerPoint window being open, for example, when a user previews a presentation in Windows Explorer. In this case, Auto_Open will run but the ribbon isn’t loaded so the onLoadRibbon procedure doesn’t run.

To use one of these pseudo events, you just declare the procedure using the signatures below. Nothing else is needed.

If you are not creating an add-in (.ppam or .ppa) then Auto_Open will not fire and you could consider using the XML method described above.