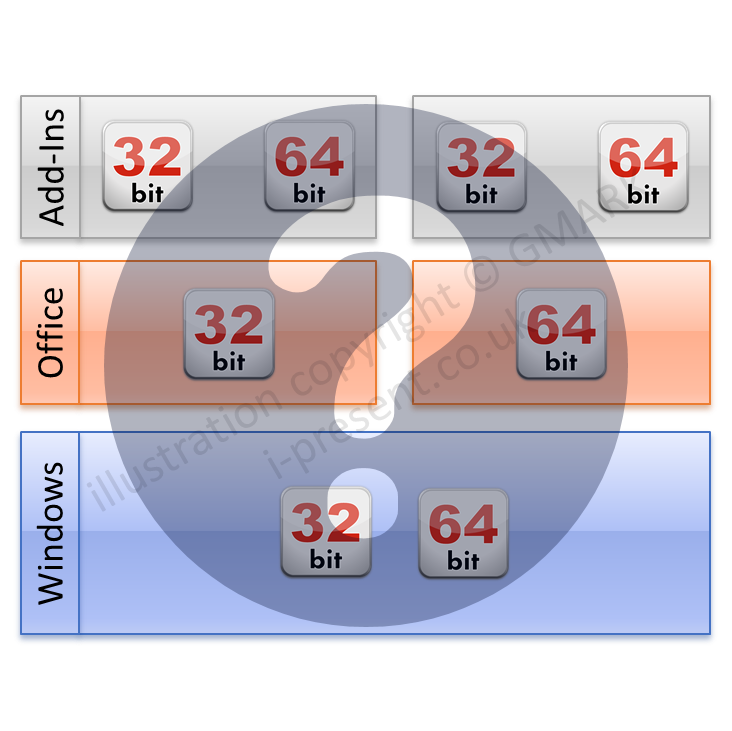 A Whole Bunch of Bits

Following on from a blog post about how to choose whether to install the 32 bit or 64 bit version of Office, we were asked to answer the wider question of 32/64 bit compatibility across the Windows / Office / Add-Ins environment.

So here we go!

Some things to make clear first

You’ll see 32 bit and x86 used across Microsoft products and external references sometimes include x32. These are all the same thing!

Like wise, x64 is the same as 64 bit and you may come across the term used to describe this attribute which is bitness.

Many folk get confused when people start asking:

This is fine if the person asking the question is only talking about Windows but if you’re talking about your wider system, including Office and possibly add-ins for Office, things get a bit more involved.

Since Windows Vista, Microsoft has launched all of their Windows Operating Systems in both 32 bit and 64 bit variants.  New PCs are all installed with a 64 bit version of Windows, usually Windows 7 or Windows 8 at the time of writing this article.  That’s all fine because both 32 bit and 64 bit apps will run on 64 bit Windows thanks to WoW (see below).

When you install Office, you also now have a choice to make as to whether to install the 32 or 64 bit version of Office (unless a previous 64 bit version was installed in which case the choice is made for you as 64 bit). We, and indeed Microsoft recommend the 32 bit version as we mentioned in this blog post unless you are a Nobel Prize winner for mathematics.

NOTE : You cannot have a mixture of 32 bit and 64 bit Office on the same machine and than includes across different versions of Office. For example, you cannot install the 32 bit version of Office 2007 and then add the 64 bit version of Excel. This is a pity since Excel x64 is really the only app that truly takes advantage of the 64 bit system so it would make sense for a user to want everything else to be 32 bit with this one exception.

Finally, if you use either Microsoft or third party Add-Ins, you will need to know if they are 32 bit, 64 bit or support both before installing them. For example, all of our add-in products have been written to support both 32 and 64 bit versions of Office with the exception of ActivePrez which is a pure 32 bit add-in so won’t run on any 64 bit version of Office.

Putting it all together

They say a picture speaks a thousand words so let’s see what the compatibility looks like for a Windows x86 (32 bit) system versus a Windows x64 (64 bit) system: 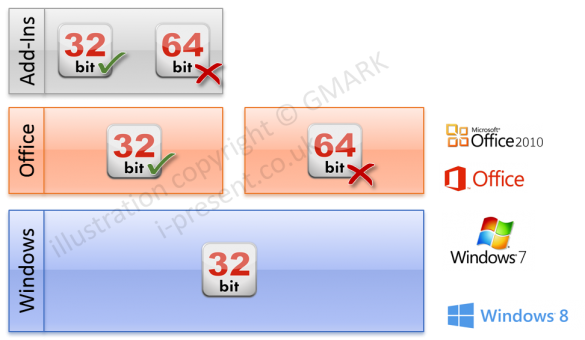 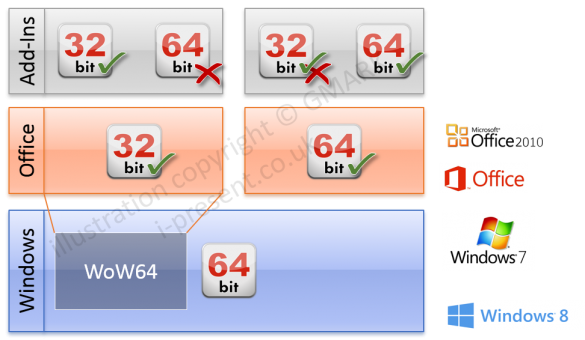 The tick and cross on the 32 bit add-in for Office 64 bit isn’t a typo but a really important point and the reason Microsoft recommend installing the 32 bit version of Office.

32 bit add-ins that were originally designed for 32 bit versions of Office will not work on their 64 bit counterparts UNLESS the developer/publisher redesigns them to be compatible with 64 bit versions of Office. This may sound like a small point but it’s this element that can cost companies huge amounts of money and may ultimately lead to products being discontinued if the costs are prohibitive. So…

If you intend to use add-ins, check to see if they are compatible with 64 bit versions of Office BEFORE you install Office 64 bit!

For those of you that are interested in a bit more detail, when 32 bit applications are installed on a 64 bit version of Windows, they are run in a special sub-system called WoW64. This allows Windows to ‘look’ like an earlier 32 bit system to these applications, 32 bit Office in the case above, and hence operate correctly. A lot of things get split as a result and this is why you see things like two Program Files folders on your 64 bit system as opposed to only the first one you’ll see on a 32 bit system: