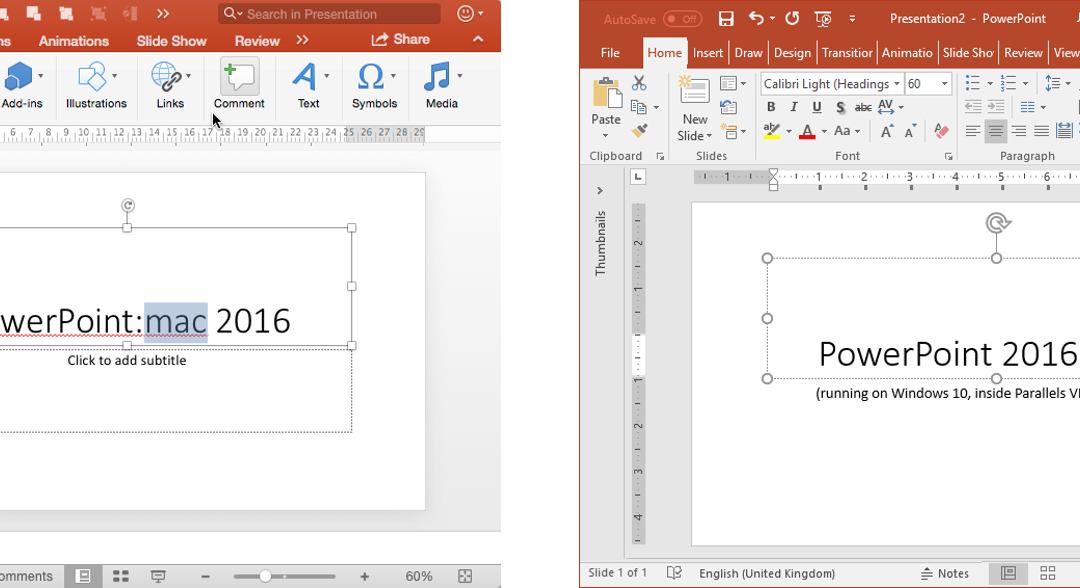 Microsoft is making great leaps forward in providing a unified experience across the plethora of device platforms we use these days. That includes the desktop environments of PC and Mac, tablets running iOS and Android, and smartphones.

But if you work in a medium to large organisation and you’re wondering what’s best on the desktop front, well, that’s what we’re going to shed light on in this article.

There are many versions of PowerPoint, both on the Mac and PC, but the latest incarnation is the best example we’ve seen in terms of conversion on a common user interface and a common set of features. We’ve looked at the latest versions* of PowerPoint 2016 as provided with an Office 365 subscription. But how close are they really and are there things that you should think about before deciding which to use?

We’ve compiled a comparative list of features (correct at the time of writing), some of which you may be familiar with and some which you won’t. They key point here is as with any software, if you don’t know you don’t have a particular feature, you can’t miss it. But when you finally discover it, you might just wonder how you ever lived without it.

Here’s our full list before we look at some of the more significant differences: 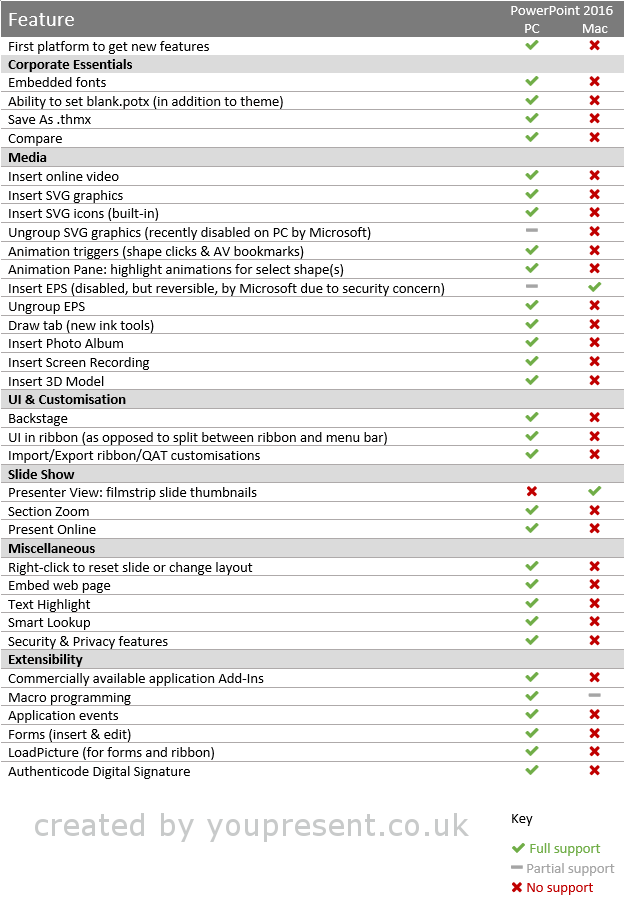 The most noticeable missing functionality from the Mac version , as far as corporate enterprises are concerned, is the following:

If we look at the second point in more detail, this might at first seem unimportant for many organisations. Extensibility is the ability to “extend” the functionality of Microsoft Office applications. Office comes with lots of great features out-of-the-box and providing organisations with the ability to extend this is a powerful argument for Microsoft Office. But when a specific extensibility need is identified within an organisation, for example “we need a client-set library of brand assets to help our users create on-brand presentations“, then the only option they have is to use the PC version of PowerPoint.

So if a large organisation can’t use add-ins with PowerPoint:mac, does that mean they have no other option? Not at all. In fact, one of the most powerful and attractive qualities of a modern* Mac computer is that they have the ability to run Windows applications alongside the Mac apps. The screenshot below shows PowerPoint:mac 2016 running alongside PowerPoint 2016 PC within a Parallels VM. This is amazing but it doesn’t stop there. Parallels has a mode called Coherence and in this mode, it’s almost as if Windows isn’t even there, making the integration even tighter so that the Windows version feels like it’s running directly on the Mac OSX. 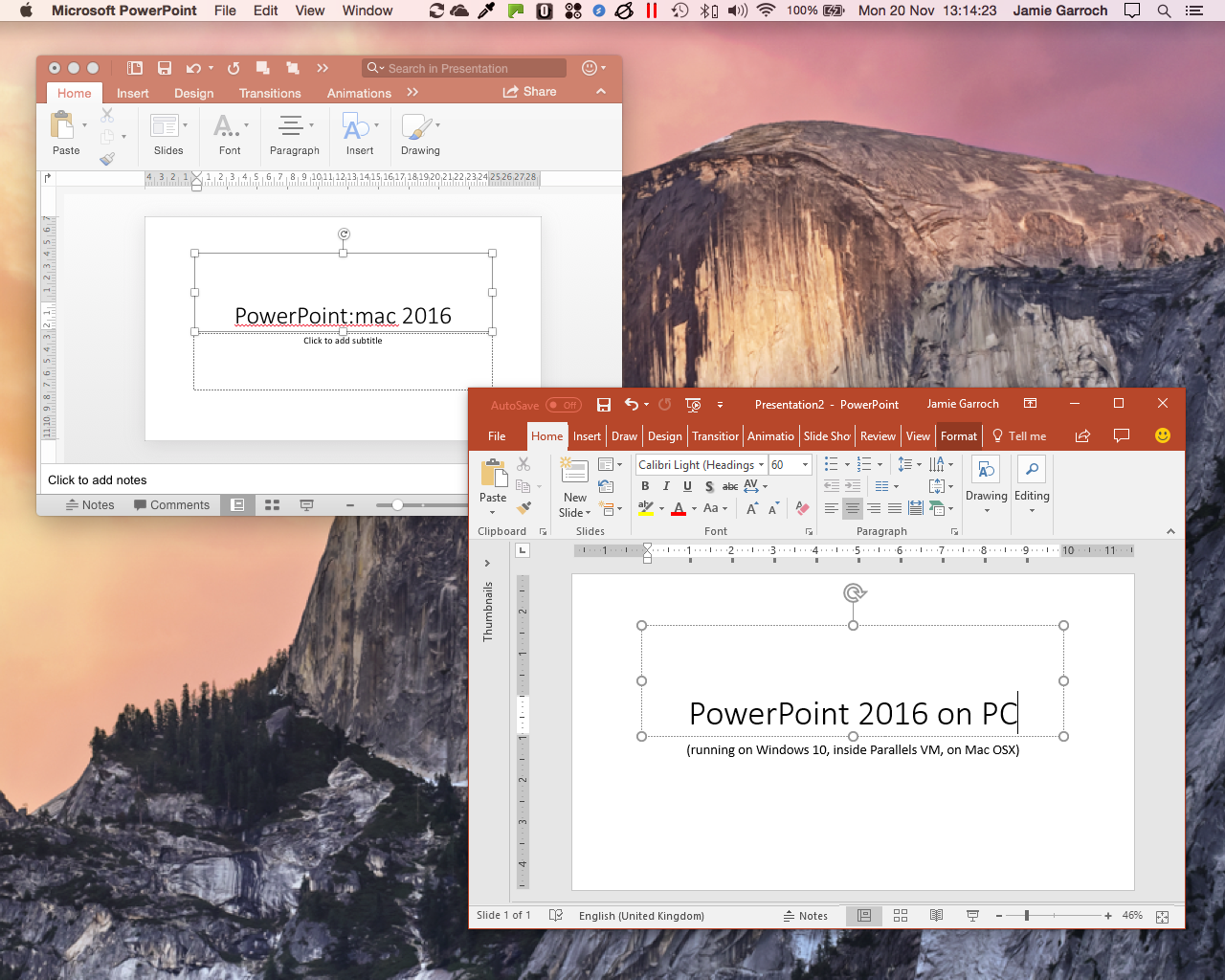 Yay. Now a corporate user can have access to all the great features that are only available on the PC, plus use the powerful extensibility features in the form of add-ins to increase creativity, capability and productivity. That sound like a win-win situation. Of course, it means a different IT investment model because of the need to buy licenses for Windows, Parallels and possibly additional Office licenses. However, one might anticipate that the ROI on such a strategy could be very rapid given the increased productivity of the user.

What do users want?

Another great leap forward by Microsoft is their partnership with User Voice to create a suite of feedback sites for various Office applications on multiple platforms. These provide users with a channel to speak directly to Microsoft and submit their ideas for improvement. This is the site for PowerPoint:mac

We trawled through this publicly available data to try to work out what Mac users were asking for, which we can see in this overall picture: 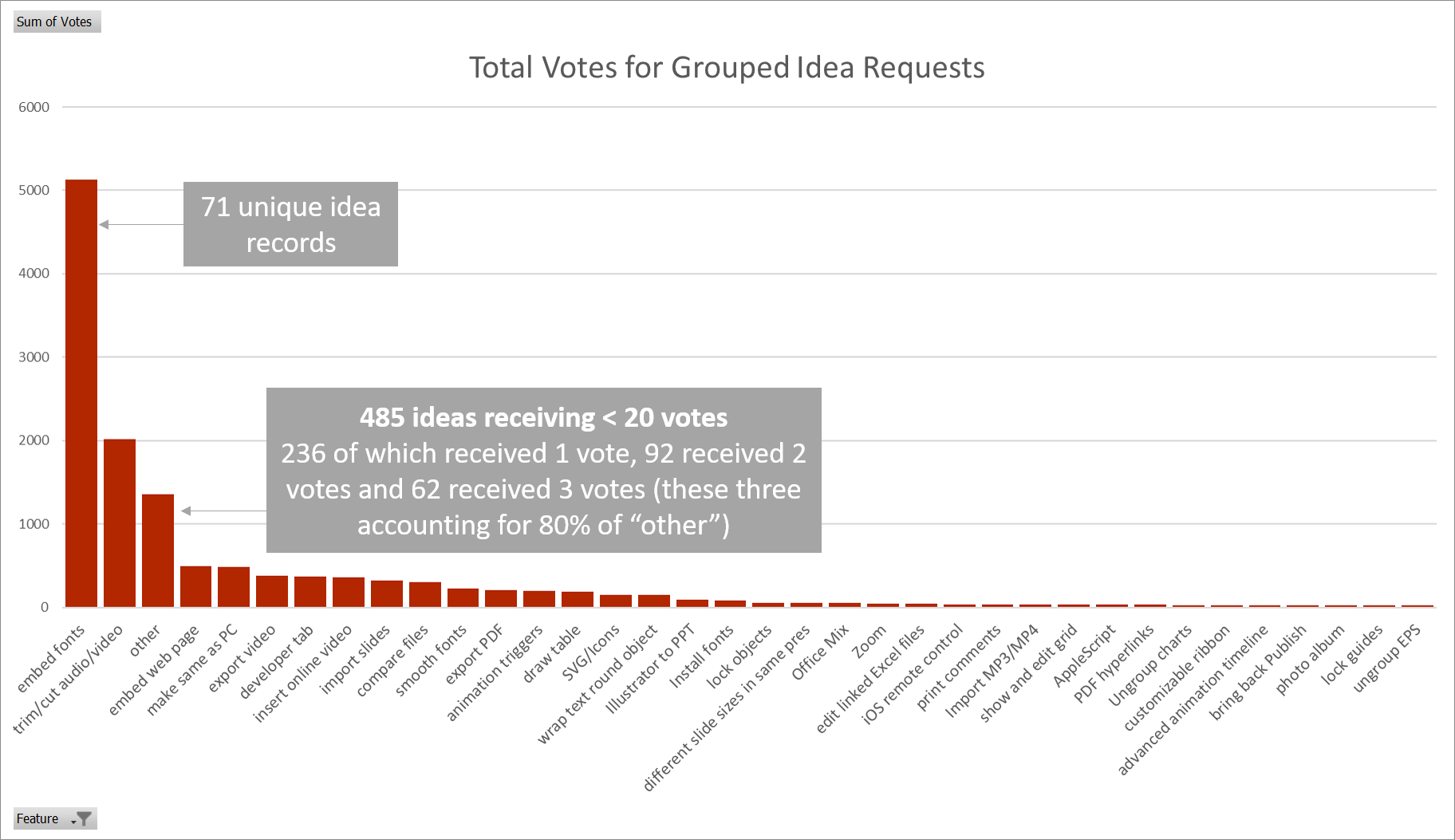 At the time of writing this article, there were 742 Mac ideas with a total number of votes exceeding 13,000. Many of the ideas were repeated, with slightly different titles, so it took some fiddling to group the same ideas. The one that stood out the most was the request for embedded fonts which has 71 separate requests totalling over 5,000 votes.

The “Other” group of ideas comprises every idea with 20 votes or less and within that group, over 80% of the votes cast go to ideas receiving either 1, 2 or 3 votes. So there’s a lot of “noise”. If the top three categories are removed from the chart above, we can see the rest of the data more clearly: 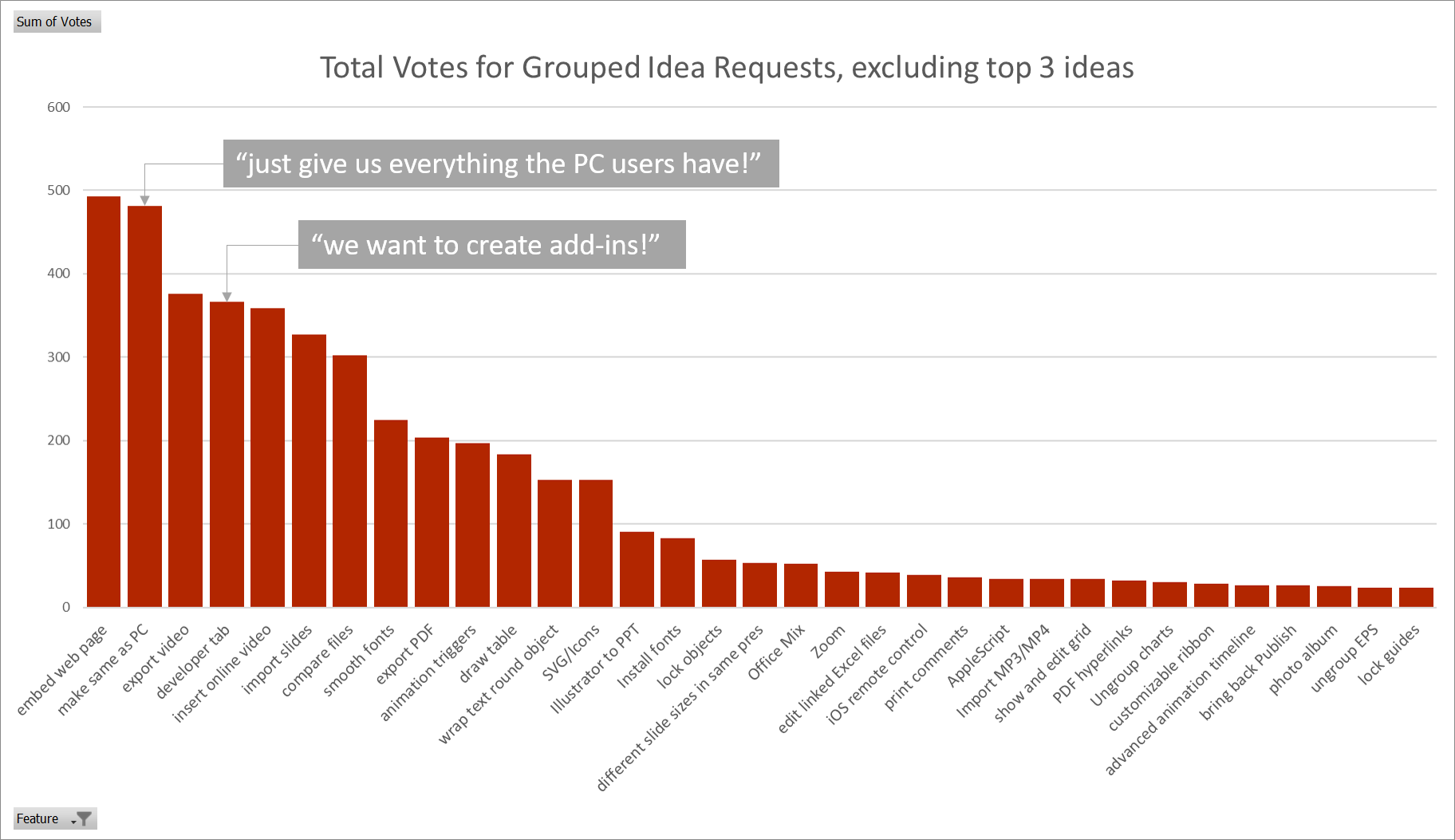 Of course many people just don’t know why they aren’t entitled to the same functionality on every platform, hence the 2nd bar! The other thing that surprised us was the number of people wanting to develop macros and add-ins for PowerPoint:mac. As a publisher of add-ins we though that this is really encouraging news as we’d love to see a more vibrant market for third party apps in the Mac space.

Microsoft is getting there. Gradually. One of the earliest posts we found on the web asking for embedded fonts on the Mac dates back to 2004 and we published this article 13 years later with no sign of a solution. On other fronts, progress has been more rapid, namely the introduction of an extensible ribbon for PowerPoint:mac 2016. There’s still some way to go and the big question is “will there ever be a time when functionality is released in parallel (excuse the pun) for both PC and Mac users thanks to a common code base?”. For now the situation is clear that PC users have the upper hand. But, with Parallels, Mac presentationists can be as creative, capable and productive as their PC counterparts.

Versions used in this comparison:

Parallels Blog : The Differences Between Microsoft Offices on Mac, Windows and iOS