SMPTE color bars is a television test pattern used where the NTSC video standard is utilised, including countries in North America. The Society of Motion Picture and Television Engineers (SMPTE) refers to this test pattern as Engineering Guideline EG 1-1990. The components of this pattern are a known standard. Comparing this pattern as received to the known standard gives video engineers an indication of how an NTSC video signal has been altered by recording or transmission and what adjustments must be made to bring it back to specification. The pattern is also used for setting a television monitor or receiver to reproduce NTSC chrominance and luminance information correctly.

The SMPTE color bars have been implemented as scalable vector graphics in the following PowerPoint slide, allowing them to be scaled freely from the 16:9 HD format. 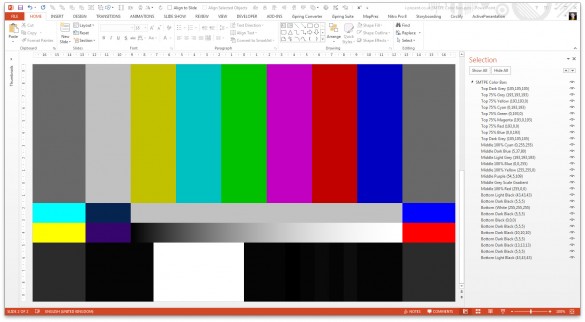